A crafty burglar arrested in Texas is making the news in self storage circles. He is suspected of breaking into units in various parts of the state, picking disc locks, and putting them back on the doors after he helps himself to what’s inside. He evidently stores the stolen property in different parts of the state and sells it far from the self storage property it came from, to stay off the radar.

While there are no definitive self storage theft statistics, ABC News reports that storage units are an increasingly easy target. Consultant and former FBI agent Brad Garrett says this is because “locking systems are extremely poor and the ability for people to go into them twenty-four hours a day sort of make them ripe for people to steal items.” In this blog, we’ll take a look at disc lock picking and how you can use new self storage technology to better protect your tenants’ belongings.

Disc lock picking is a type of theft that leaves no sign of forced entry. That presents a challenge for self storage owner/operators using protection or insurance programs, most of which omit “mysterious disappearance” with no evidence of forced entry.

“Historically, before new technology like Nokē® Smart Entry, the least amount of break-ins happened at facilities with cylinder locks (set in the door itself) and disc locks (placed on the hasp of a traditional door),” says Ashley Earick, General Manager of Claims Pros, the third-party administrator of Storelocal Protection®, which is reviewing all claims with these lock picking characteristics and reopened at least one in Texas that was previously denied.

In fact, there are dozens of videos on YouTube showing how to pick disc locks for storage units, from Public Storage, Extra Space, and dozens of other brands. They have been posted for years, and as recently as October 2021. Ironically, one of the main sources calls himself the LockPickingLawyer.

Ashley, who previously spent 15 years as a claims expert with Tenant Property Protection (TPP) and saw first-hand the claims challenges many tenants faced, knew there had to be a better way. Working closely with Terry Anderson and the technical team at TPP, she was able to turn that vision into reality by helping bring Claims Pros to life.

The cutting-edge technology of Claims Pros enables Storelocal Protection to offer customers seamless, self-service online access to the property protection claims process. It gives both customers and operators full visibility, and its customer service is far superior to every competitor: Claims Pros pays claims within 72 hours of receiving all required documentation.

How to Use Self Storage Technology to Prevent Theft

“Technology is evolving to the point where tenants can receive a text message alerting them of motion in their unit. This will be helpful in preventing loss,” says Ashley. This includes both smart access technology and individual door alarms. “Door technology without a key or a lock will lead to less loss because it takes more skill and time to break into these units.”

Burglars will focus on easier targets, low-hanging fruit, like self storage facilities with traditional doors and hasps, using padlocks and other locks that are better candidates for break-ins.

“The lock stops petty theft, but not a career criminal,” says Chris Betteridge, CRIS, Protection Program Director at Deans & Homer, which backs Storelocal Protection. Locks that can be compromised give customers a false sense of security. One comment on a video by the LockPickingLawyer put it this way, “False security is what I had.” 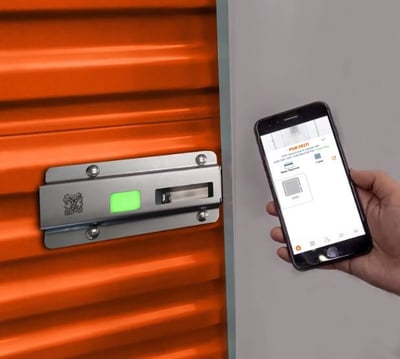 Today’s technology offers many ways to enhance security. Nokē Smart Entry transforms traditional self storage units into smart units. It is a wireless, cloud-based digital key management solution that enables tenants to access the facility and their space using their smartphone.

Simply put, Nokē Smart Entry units are hard to break into. It takes a lot of effort and skill to master this kind of theft, which means facilities with Nokē Smart Entry technology are not low-hanging fruit for burglars.

Nokē smart locks track all access into and out of each unit. It notifies the owner/operator of unexpected activity, putting intruders on their radar. It can also send text messages to tenants when their unit is entered.

According to the Janus website, “The tenant can set up notifications on their smartphone that notify them when any mobile access (activity) related to their unit(s) takes place at the facility. It can also notify them if the unit door was not closed properly when they leave the facility.”

Nokē Smart Entry can also sense motion inside a unit. Again, from the Janus website, “Each unit can be equipped with a motion sensor that provides notification to the tenant (and site manager) that motion has occurred in their unit – this helps to prevent unauthorized access to the unit from other units...,” such as a burglar who climbs over the wall or cuts a hole in the wall from an adjoining unit.

Ashley has more to say about this: “Some tenant insurance plans, and even some protection plans, have a deductible for tenants who do not use a disc or cylinder lock. It will be interesting to see if this changes to doors with smart technology versus these types of locks.”

Options to Enhance Self Storage Security

As a self storage owner, you have many options to enhance security. If you’re looking to build a beautiful, new class-A self storage facility that competes with the REITs or bring your existing facility up to the standards set by today’s competition, Nokē smart locks rank among the best self storage locks on the market and are an excellent choice. See this case study, “Securing Profits with Nokē Smart Entry System,” highlighting how tenants are willing to pay more for smart units with keyless entry.

If Nokē Smart Entry doesn’t fit your budget today, there are other ways to enhance security at your self storage facility, such as lights and on-site managers, according to Chris Betteridge. He finds that the biggest issue in theft is location. “Rural locations don’t typically experience many break-ins, but urban locations have them more frequently.”

“Break-ins may be the most common claim,” says Chris, “but not the most expensive type of claim.” Typically, thefts are isolated incidents involving one unit; as opposed to rodent damage or roof leaks, usually impacting multiple units, and generating multiple claims. There’s no substitute for good facility maintenance. It reduces rodents, water damage, and many other things that deteriorate the value and reputation of your self storage property.

Here’s a creative way to enhance security suggested by James Appleton, Storelocal Member. In addition to being the Director of Sales, Special Risk, at MiniCo Insurance Agency, James helps run his family’s portfolio of self storage properties in Phoenix, Arizona. They were having a problem with loitering and other “after-hours activity” in one area of a facility.

After looking at options such as Nokē Smart Entry and BlueEye (live self storage surveillance video monitoring using artificial intelligence), James set up his own, less expensive solution, inspired by the Ring video doorbell on his front door. He installed motion-sensing Ring cameras, aimed at the trouble spots. When the cameras detect motion (people, not traffic or cars), James and the manager receive an alert on their smartphones, via the Ring app, and a recorded announcement comes on, telling intruders they are trespassing. Typically, the trespassers leave. But if they don’t, James or the manager can turn on lights and sirens to further encourage them to leave.

According to James, “It’s an inexpensive, fairly simple solution. Anyone can install a wireless Ring camera anywhere. I added a router extender to get a better Wi-Fi signal. And the Ring camera enables you to interact,” says James. Any of you who know James can guess that he enjoys this part! But being awakened in the middle of the night by a trespasser isn’t for every self storage owner/operator.

Learn More About Improving Your Self Storage Business

At Storelocal, we take security as seriously as our members (check out our blog on various other self storage security solutions). So what is Storelocal? We are a cooperative of independent self storage owners and operators who have come together to increase our competitive advantage in the marketplace, leveraging new and existing resources to lower our operational costs and increase profits. Whether you are a new self-storage owner or thinking about how to expand, upgrade, and improve your current facilities, we want to help.

Many people renting self storage units are in the process of moving. So, it makes sense that they would need a moving truck. In ...
Start Reading
Storelocal Team Jun 14, 2022 9:03:47 AM 13 min read

Just like any other large investment, you want to be sure your self storage facility is properly protected. So you build high ...
Start Reading