“I had to be dragged into high tech,” said MaryJane Cothran of StorPlace about her experience on the winning team of Storage Wars 2.0. She and five colleagues named their wargaming team the Threenagers and peered into the future of self storage at Storelocal’s Member Value Meeting in Savannah, GA, June 9-10, 2022.

Storelocal’s Monthly Member Call on June 21 was devoted to lessons learned from the wargaming exercise. “When the team wargame started, I thought, ‘Who needs robotic loading in Tennessee?’ I went with what I was comfortable with, like expanding properties,” said MaryJane. She and many other players embarked on the future by focusing on the past – how self storage used to operate. Wargaming changed all that.

The wargaming exercise, Storage Wars 2.0, is a business simulation designed to help envision and prepare for the future. Storelocal ran Storage Wars 1.0 at the unConference in Hawaii in October 2021. Amidst the tropical paradise, there was a buying frenzy that turned Storage Wars 1.0 into an acquisition game. Every team expanded its portfolio and ignored operations. 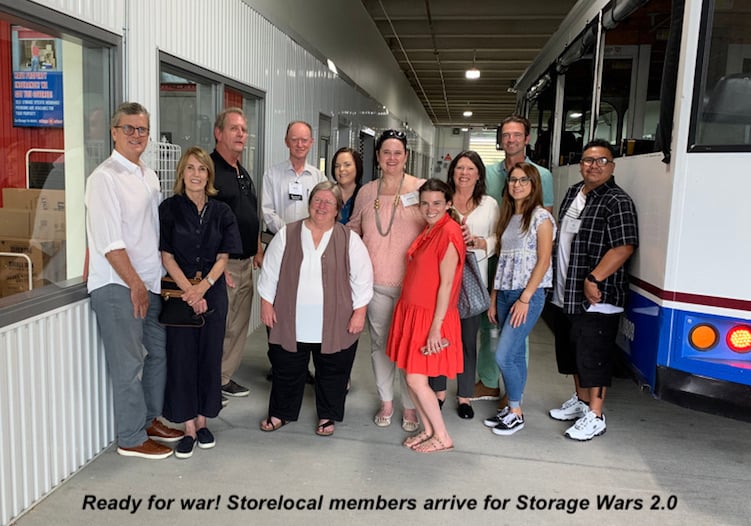 In beautiful Savannah, GA, the wargame strategy turned to operations. Three teams played against each other in Storage Wars 2.0. Each started with a newly acquired 10-property portfolio, a budget with cash and credit, and a series of decisions to make:

MaryJane continued, “As we worked together, I applied what we learned during Covid-19: that we have to do things differently. We found we were better together, and we became a team as we listened to each other’s different perspectives. Then we were willing to try new things, like robotic loading. We weren’t full-in, but we started.”

Other teams got a later start. Much like many in the self-storage industry, some were slow to adopt technology.

“Robotic loading isn’t a thing,” said one player on another wargaming team, dismissing it as an option. But three simulated years later as Move 2 began, the team that dabbled in robotic loading found that their portfolio value was greater than expected because they attracted and retained customers who wanted cutting-edge technology. Owner/operators who were using robotic loading and smart entry technology were able to serve customers with driverless vehicles.

“Robotic loading sounded unrealistic,” said Shannon Charbonneau of XPS Call Center. “But as the wargaming went on, we could see the effect of new technology like that. We were able to see different perspectives and decided to try new tech.”

“The combination of realistic and futuristic options made the game real,” said Salyna Ortiz, of National Self Storage. “At our store two years ago, we started with traditional doors, converted half of them to Nokē Smart Entry, then converted the rest of the facility to Nokē. It made things easier for the customer.”

Arlo Dill, also with National Self Storage, shared how they increased rent for smart spaces, while Sara Lopez with National added that smart stores are not only good for the customer, but they’re great for operators too. “I open the doors with my Apple Watch now, which is so much easier than using my phone or a key.” 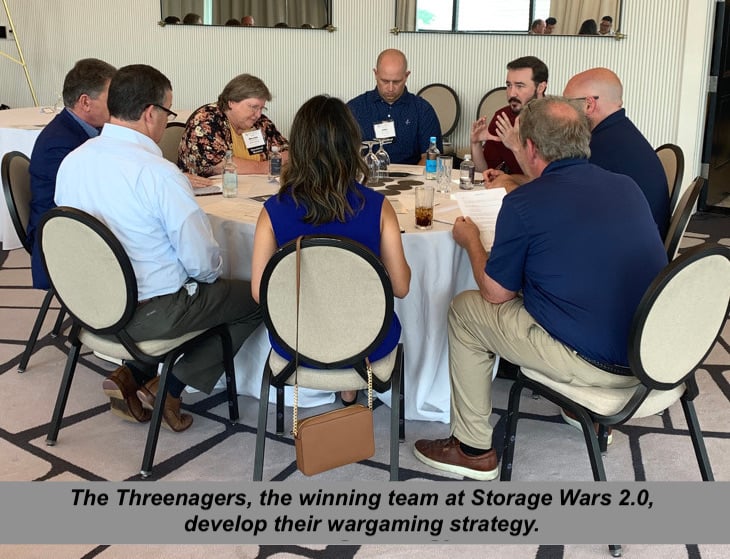 This kind of collaboration is one of the strengths of using an interactive team wargaming simulation. “My team had an accountant, a store manager, three experienced owner/operators, and vendors. The exchange of ideas and debate within this group was 10 out of 10,” said Doug Pyles, a new Storelocal member who is also new to self storage.

Maricella Smith, who facilitates Storelocal’s Central Billing initiative, said, “As an accountant, I didn’t think we should liquidate all our cash and go into debt to acquire and expand. But from an investment point of view, that gave us a better outcome for our team. Accountants are usually the last to know what’s going on. Seeing behind the scenes really helped.” 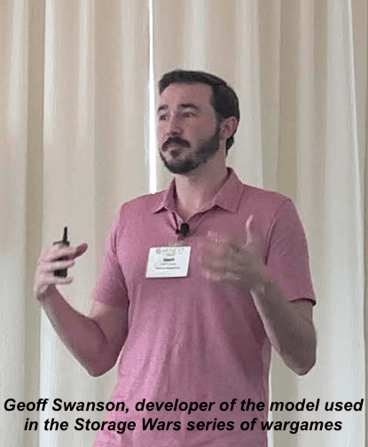 “The wargaming exercise was fascinating. They gave us very little when we began: very little instructions, a lack of information. It was all very vague,” said Steve Mirabito. “We had a facilitator so we could ask questions and we had money to work with, so we spent it. When we used it up, we had to stop and think about what makes a difference to the customer, like software. You need new software to meet customers’ demands, software like what Tenant Inc. is developing.”

“Then we focused on the items with the fastest return on investment. Things the customer could see, like replacing old doors with new Janus doors (Nokē® Smart Entry). But we had to figure it out in the game,” said Steve.

And that’s the point of business wargaming: to think, to focus on strategy, to explore risks and opportunities. 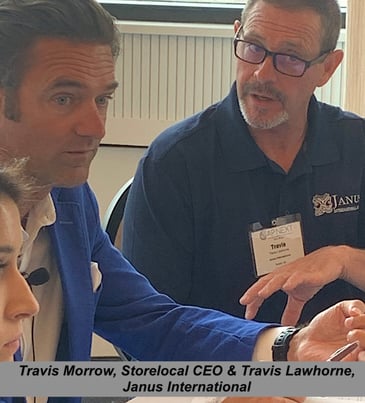 Each team’s decisions were recorded and fed into a model to calculate results in three-year increments. After Move 1, teams reviewed interim results, evaluated for success, modified, or continued their strategy, and made their next set of decisions.

The winner was the team with the most valuable portfolio at the end of the game. Their decisions added value to their properties by attracting new tenants, who were paying higher rates, and by retaining existing tenants, whose rent increased over time.

“Our team worked from the bottom up, focusing on how to upgrade what we had, like the website, SEO, call center, and property management software,” explained Sara. “Then we looked at capital expenses.”

“It was good to get that perspective,” added Salyna. “Seeing the whole picture beyond daily operations helped operators see the industry more clearly and understand the business better.”

To make the Storelocal wargames as realistic as possible, Anne Mari DeCoster, a wargames expert who has worked with the government, led the wargaming process. Anne currently serves as Chief Operating Officer of Storelocal Storage Co-op. 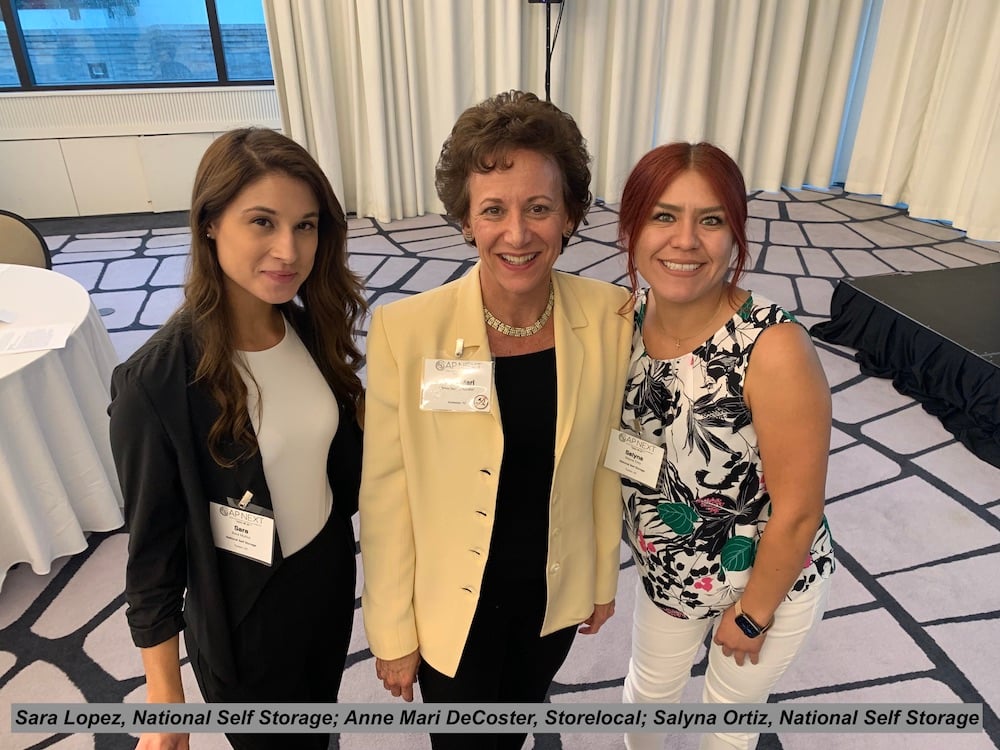 “Anne left us with nothing as the wargaming started, just like they did in Washington DC when she did wargames for the Department of Defense in the 1980s and 90s,” said Steve.

“In fact,” according to Anne, “Storage Wars 2.0 applies the same strategy as the wargames we played during and after the Cold War to prepare for a different future, wargames in which we envisioned things from drones and mobile phones, exoskeletons to airplane fuselages without rivets.” Envisioning future needs enables you to meet them – and fund them when you’re the Department of Defense. DOD funding brought about many of the products and services we all use today, like smartphones, the internet, and so many others. They were developed with defense R&D investments and are now fully commercialized and fueling the global economy.

Players in Storage Wars 2.0 learned a lot about improving their business – had lots of suggestions for the next iteration of wargames. Keep your eye out for details on our next Member Value Meeting and our next round of wargames!

What would you develop instead of robotic loading? Have any ideas for Storage Wars 3.0? Sound off in the comments below

Storelocal is Moving to Central Billing! Benefits For Members and Partners

At Storelocal, we’re always looking for ways to improve our services, both to our members and our partners. One new change ...
Start Reading
Storelocal Team May 3, 2022 12:42:56 PM 7 min read

Creating a Self Storage Wargame Strategy to Prepare for the Future

Storelocal has broken new ground in Hercules, California!  As the only self-storage facility in the city limits of Hercules, ...
Start Reading